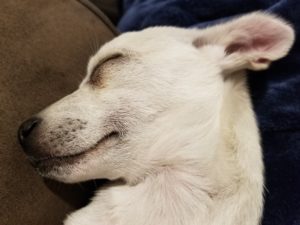 I will start out this story by first saying that my poor sweet pup Casper is just fine. Happy and healthy. Now we can proceed without worry. I knew it was going to happen. Casper eats everything. How he hasn’t been rushed to the emergency vet yet is truly a miracle. Yesterday was his day though. I took a short nap after work for only an hour, while the fur babies played in the backyard. I woke up, went to the backdoor, and was not greeted by my sweet little white doggie, but instead by a mutant, whose head had bright red skin and twice the normal size of my sweet pup. It was the saddest looking creature I had ever seen. I grabbed him, put him in the crate and drove him to the emergency vet that was thankfully only 10 minutes away. He was alert the entire time, but extremely uncomfortable and twitchy. I knew exactly what he had done. He ate a bee. My sweet ladies are all over the garden and he has been trying to catch one for weeks. The fact that he hasn’t caught one yet is a testament to his terrible hunting skills. Bees are not exactly fast and graceful, and if you are playing just a numbers game, he really should have caught one way before yesterday. Two little shots later and he was good as new. Well… not exactly, he still looked like a tomato, but he was at least on the road to recovery. This morning he is back to his same crazy self. I wonder if he learned his lesson. (The picture is just of him sleeping. I was in such a panic to get him to the vet I didn’t stop to take a picture of him with a swollen head. Maybe next time)

The Final Time We Have To Move The Bees!!!!
It Will Bee Time Soon