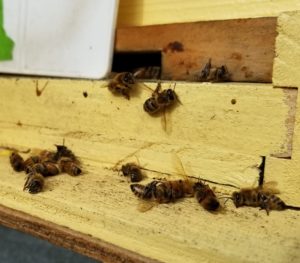 This is the first Winter I have had my own beehive in my backyard. Up until last Spring, when I caught a swarm placing a bait-box in my backyard, all of the bee boxes Rachael and I had were in her yard. I spent every day that Spring and Summer watching their every move. I was delighted when I would see them coming back from foraging with huge pollen pants. I would also mourn when I would see dead bees around the hive and all over the ground. Often I would find myself very stressed out that I would see so many dead bees. After a few panicked phone calls to my mentor I was reassured that it was a normal part of bee life and not to panic.

Now it is January and once again I am panicking. I am used to seeing dead bees around ground, but now there are 20 or so dead bees on the landing and just inside the hive entrance. Rather than call my mentor again panicking, I did a little research. It was on a blog called Honey Bee Suite that I got a good dose of reassurance. According to the author, “If you consider that your healthy colony may have 50,000 or maybe even 60,000 members going into the fall but may have only 20,000 come spring somewhere along the line you lost 30,000 to 40,000 bees. That’s a bunch.”

Yes, that is a bunch! And I was worried about the 20 or so that I was finding each day. Is this normal for my hive? Well, apparently yes. You can learn a lot from websites and blogs, but just as important as doing research is watching your bees in their daily lives. The article goes on to say that it is actually a good sign when you see dead bees on the landing, because that means they are clearing them out of the hive. No dead bees would be cause for concern. Armed with this information I have better understanding of what I should be looking for. 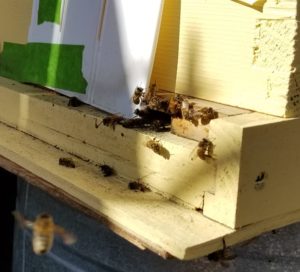 To end on a happy note though. This last picture is what happened 20 minutes after the first picture when the sun came out. They are clearing the dead and are going out foraging again! Enjoy the sunshine ladies!!!